How to Report Child Abuse & Neglect

If you are being abused, please tell a safe person – that’s someone you can trust like a teacher, counselor, school nurse, neighbor or parent. You can also talk to a Childhelp USA hotline counselor.

What information will I need to provide when making a report? Click here 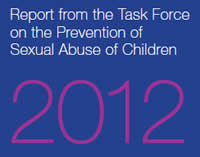 Missouri Task Force on the Prevention of Sexual Abuse of Children

The Missouri General Assembly established the Task Force on the Prevention of Sexual Abuse of Children in statute in 2011. The Task Force was directed to study and identify strategies for preventing child sexual abuse and provide recommendations in a report to the Governor, General Assembly and the State Board of Education by the end of the year.

The Task Force released its initial report in 2012 after holding public hearings and receiving testimony from 35 experts in the field of child abuse. (View Report Here) After the report’s release, the General Assembly reauthorized the Task Force with a mission to continue to gather information and to begin implementing the report’s recommendations. The full Task Force meets quarterly with various work groups meeting regularly throughout the year.

MORE INFORMATION ON THE CONTINUED WORK

Missouri KidsFirst
A statewide network of individuals, programs and organizations committed to protecting Missouri’s children by improving the response to child victims and ending the cycle of abuse in our communities.

Adverse Childhood Experience (ACEs) Study
Childhood experiences, both positive and negative, have a tremendous impact on future violence victimization and perpetration, and lifelong health and opportunity.

Trauma and Your Family

Human Trafficking
Human trafficking is a form of modern slavery that occurs in every state, including Missouri.